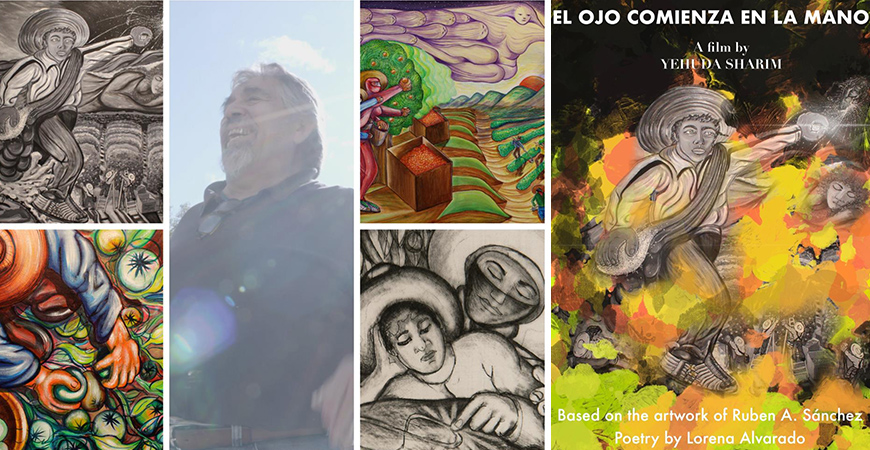 Sharim, a professor in the Global Arts Studies Program, will be in conversation with Sánchez in the coming months as a way to premiere the work where it originated and needs to be shown first: Merced and other nearby locations.

The documentary film serves as a tribute to campesino life in rural California through the artwork of Sánchez — an artist largely absent from critical conversations on Chicano art. "El Ojo Comienza En La Mano" offers an unsentimental reckoning with the fate of many cultural workers that struggle between paying rent and/or creative endeavors.

"Sánchez reminds us that art is not merely a product of art schools but part of a radical vision of generosity that is rooted in community experiences," said Sharim. "His work is greater than any museum, and his vision cannot be framed or limited to walls. His work deserves attention for its ability to bear witness and maintain a vision of dignity and humanity to Central Valley experiences. Sánchez and our communities come first, and that is why we decided to premiere the work in Merced."

The 15-minute film will be presented at the Merced Multicultural Arts Center, located at 645 W. Main St., on Friday, Aug. 26, at 6 p.m. A conversation with both Sharim and Sánchez will follow.

"El Ojo" is the latest work in Sharim's repertoire and features collaborations by Lorena Alvarado (poetry), Richard Gomez (artist), Elizabeth Lopez (production) and Federico Llach (original music). Other films Sharim has directed include "Experiments in Freedom," Letters2Maybe" and "Red Line Lullaby." His films have appeared in film festivals and university settings around the world, and provide a comparative study of immigration and displacement, shedding light on the changing constructions of home, nation and belonging.

The film's trailer is now available on YouTube. More information about the film and Sharim's other projects can be found on his website.